It's hot sunny day. For today, from meteorological report, it even make it worst....... It's confined room, equipped with aircond, but the aircond is not functioned It's confined room, with no aircond, shared with 25 others They can bear for almost two hours Without significant complaint Because of the knowledge Because they wanted to understand It is almost a day dream To see them, with these quality Equipped with weapon and strong spirit Uphold Islam, to help their brother that suffers But, still they don't understand One day, might be one day...........insyaAllah
Post a Comment
Read more 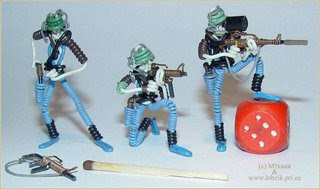 I simply love the perfect sound, the voice that praise the Al Mighty, the voices of children when they giggle, the sound of raindrop. I adore brave children fighting with stones and sticks in front of mighty tank. I envy those who are handicap, yet die as matyr, those who achieve the total freedom from this worldly live, those who will drink from the pond of Al Kautsar, those who comprehend the meaning of Makrifat. I rather become an Ayyar then to inherit the wealth of Bill Gates, fight under the flag of Al Mahdi, and strictly uphold the concept of Futuwwah. And admire the person whose in his hand the sword of Dzulfiqzar.
Post a Comment
Read more 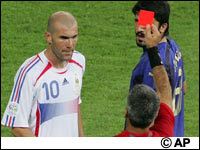 When people said something bad, when people said at your back, when people pointed finger at your face, when your siblings murdered and get killed, when not allowed to sc hool because of a men with a gun told you not to, when dignity was disgrace at the lowest point, when feel humiliate, when the most precious thing that so sacred become one's teasing point, when can't bear it anymore........the heart feel the most painful feeling............and that is all..........and the action took place, with or without sorry, but of course, with no regret at all! He listen, and He knows all................
3 comments
Read more

When you have shed tears for Zidane to uphold his dignity and honour of his family, how you react to all the Palestinian fighters and murdered children in the name of Islam, brotherhood, nation and their family then……………. Yes, we should www.pedulipalestina.blogspot.com
1 comment
Read more
July 11, 2006 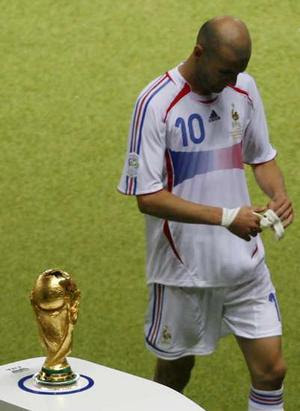 "It's a game that we afford to loose", said my heart with joy before the final first kick started in Berlin. Of course the Italian has always been the favourite team to win the World Cup campaign this time 2006. "They (Les Blue) have bring the joy and happiness since the quarter and semi final, and that was enough". The first half of the game, seem the best quality on both teams they could bring, as both teams try hard enough to score a lead for the advantage towards the whole game, and it's take only 7 minutes for Zidane to score the third goal for WC06 through penalti. It's nearly not even a goal, after the ball hit the post hard on the top but suddenly land just behind the goal line. The fan nearly don't believe that Zidane will miss that golden oppurtunity, and after the official stated the confirmation on the goal, the crowd scream with laughter. The formation of 4-5-1 seem too hard for the Frenchmen to get through the Italian defenders lead by
Post a Comment
Read more

The next Midfield - 'Ribery?'

July 09, 2006
Zidane is for sure will left the national France jersey after WC2006. To know this, most of the fan will look up for the next midfield that have the same quality with the King Zizou. The tight game in semi final between Portugal and France, shows some hope for the France fan, when the secret weapon of France, Frank Ribery never stop to show quality skills, unpredictable action and cross which will support the front line to search for goals. He is sure can dribble, make a twist turn to decieve the defenders, cross a quality ball to striker and front man, he himself can score, he is every where in his position, and with a scar, he already be a new star. Both winger, Ribery and Sagnol, with the appearance of the King Midfield, Zinadene Zidane and Patrick Vierra, act as the centre to attack, never seem to put themselves in rest. Meski keringat pasukan tua France, nampak tidak dapat menyaingi semangat perjuangan kebanyakkan pemain muda Portugal, tentunya C. Ronaldo dan Deco, formula bekerja
Post a Comment
Read more